James Shapiro's 1606: William Shakespeare and the Year of Lear (Faber) brings to dazzling life the world from which sprang the best crop of new plays in theatre history. ' Nicholas Hytner, Observer

'James Shapiro's 1606: Shakespeare and the Year of Lear (Faber) is a meticulous narrative of a momentous year in the life of the playwright and a masterpiece of intelligent literary criticism.' Colm Toibin, Observer

'James Shapiro's 1606: William Shakespeare and the Year of Lear (Faber) is a superb follow-up to his 1599, packed with intriguing discoveries that bring the Jacobean world to life. ' Stephanie Merritt, Observer

'Shapiro's rich portrait of 1606 is every bit as compelling as his excellent 1599, handling huge amounts of research with a winningly light touch.' Claire Lowdon, Sunday Times

'My book of the year is a "book of a year" in a slightly different sense. I'm thinking of James Shapiro's truly magnificent 1606: William Shakespeare and the Year of Lear. This is one of those rare academic studies that reads like a novel – a novel with at least one major revelation per page…It's a work of genius.' Paul Muldoon, TLS

'This in a sense is Shapiro's sequel to 1599, but there's nothing jaded in the performance; few serious academics marshal their research so elegantly, and few synthesis literary and historical elements to such powerful effect' Andrew Motion, TLS

'James Shapiro's outstanding 1606 (Faber), in which the Jacobean Shakes­peare gets his due, follow[s] Shapiro's magnificent take on the Elizabethan one in 1599.' Sarah Churchwell, Guardian

'In James Shapiro's 1606: William Shakespeare and the Year of Lear (Faber, £20) we meet a middle-aged Shakespeare who is stranded in something of a dry patch, until the political firestorms of early Jacobean England push him into producing his greatest play, King Lear.' Daniel Swift, The Spectator

'Shakespeare might hardly seem to need another biography, but James Shapiro's 1606: William Shakespeare and the Year of Lear (Faber) is so much more than that. Using the same methodology that he brought to 1599, his masterpiece of 10 years ago, Shapiro digs deep into the social and political context that gave rise to Shakespeare's greatest late work. There is terror on the streets, thanks to the failed gunpowder plot and to an outbreak of plague, while at the Jacobean court politics is, as ever, rotten to the core. In masterly detail Shapiro shows how this simmering paranoia fed into every line of King Lear.' Kathryn Hughes, Guardian

'One of the best books in recent memory about Shakespeare.' The Daily Beast 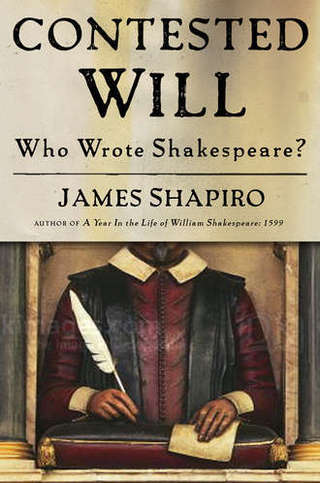 Praise for CONTESTED WILL:

One of the 'Best Books of the Year' (Publishers Weekly; The Observer; The Kansas City Star; The Sunday Star Times (NZ);The Financial Times, The Providence Journal; and the Times Literary Supplement)

“A book no Shakespearean should miss” (Booklist--starred review)


“Shapiro’s book is… authoritative, lucid and devastatingly funny, and its brief concluding statement of the case for Shakespeare is masterly.” (John Carey, Sunday Times)

"In this fascinating study, Shapiro, an English professor at Columbia, casts skepticism about the authorship of Shakespeare’s works as a “long footnote to the larger story of the way we read now” and traces shifting assumptions about the relation between art and autobiography….. Shapiro is lively, psychologically subtle, and dryly appreciative of conspiratorial excess.” (The New Yorker)

“‘Contested Will: Who Wrote Shakespeare?’ serves as the first full-length discussion of the big authorship question by a Shakespeare pro in 100 years, maybe the first ever. It's worth the wait. Shapiro is a powerful, engaging writer with a gift for connecting great generalities and illustrating them with telling examples. "Contested Will" explores the origin and development of the authorship question with unexpected openness and some insights that will be new even to the most seasoned of authorship buffs.” (Ward Elliott, Los Angeles Times)

“'Contested Will' is dense with lives and stories and argument. It is also entertaining….The last chapter is a return to sanity: a brilliant defence of the man from Stratford. Piece by piece, Mr Shapiro builds the case— the contemporary witnesses, the tracks left by printing houses and theatrical practice, the thousand details that show, apart from anything else, how unnecessary the whole farrago has been. The Shakespeare that emerges is both simple and mysterious: a man of the theatre, who read, observed, listened and remembered. Beyond that is imagination. In essence, that’s what the book is about." (The Economist)

"'Contested Will' is a bravura performance" (Saul Rosenberg, The Wall Street Journal)

“As he conducts us through the pretensions of the Baconians, the Marlovians, the Oxfordians, and on through the latest internet conspiracy theories, larded with pompous quasi-legal language about "reasonable doubt" and "prima facie case", Shapiro sprinkles his text with glinting, steely facts, about the actors of Shakespeare's company, about Elizabethan printers and their methods, about what Shakespeare's manuscripts reveal about how his plays and stagecraft worked. These details, in the chapter which he devotes to Shakespeare himself, are the most riveting part of his book…. Shapiro does not waste words on the preposterous, but he does uncover the mechanism of fantasy and projection that go to make up much of the case against Shakespeare. His book lays bare, too, assumptions about the writing life that come to us from the 18th-century romantics. Those who made Shakespeare a demigod have much to answer for.” (Hilary Mantel, The Guardian)

"Shapiro, author of the much admired 'A Year in the Life of William Shakespeare: 1599,' achieves another major success in the field of Shakespeare research by exploring why the Bard's authorship of his works has been so much challenged....As Shapiro admirably demonstrates, William Shakespeare emerges with his name and reputation intact." (Publishers Weekly--starred review)

“Most Shakespeare experts have a lot to say about the conspiracy theorists who deny Shakespeare’s authorship of his own plays – but very little of it is printable, let alone as readable as James Shapiro’s Contested Will….[T]he application of Shapiro’s detective skills to the piles of pseudo-scholarship from the past century and a half yields valuable results. Contested Will isn’t just the most intelligent book on the topic for years, but a re-examination of the documentary evidence offered on all sides of the question.” (Michael Dobson, The Financial Times)

"After all, it does matter who wrote Shakespeare, because the case Shapiro makes for him doubles as a defence of art. As he complains, the argument about the poverty of Shakespeare's experience refuses to acknowledge what he learned from books: all his plays are retold tales or commentaries on recorded history. More damningly, the doubters fail to credit Shakespeare with possessing imagination which, as Theseus says in A Midsummer Night's Dream, means the capacity to mould "airy nothing" into matter and create alternative worlds out of words. Contested Will ends with a challenge, issued as much to theory-addled academics as to deluded cultists: scepticism about Shakespeare signals an agnostic disrespect for what Shapiro bravely, bracingly calls "the mystery of literary creation." (Peter Conrad, The Observer)

"There is fascinating new research in Contested Will, whereby Shapiro aims his question - why did they believe this ridiculous conspiracy theory? - at a number of distinguished anti-Stratfordians. In every case, his answer is psychologically intriguing and entirely convincing." (Jonathan Bate, Sunday Telegraph)

"Shapiro's meticulously researched book reads like a detective novel….[It] is an important book, which goes a long way towards putting an end to the authorship question once and for all. Bring on the conspiracy theorists, I have met their nemesis, and its name shall be Contested Will." (Ben Crystal, The Independent) 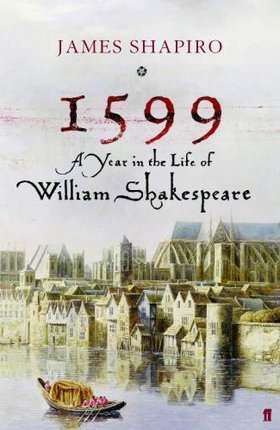 “By giving us an account of what Shakespeare must have read, heard and seen that year, Shapiro goes further than any other biographer in accounting for the relationship between those words and his life.”-- Frances Wilson, The Daily Telegraph

“From the deliciously vivid first pages, in which a group of armed theatricals make a dash through the snow in the dead of night to filch a theatre's timber frame and transfer it to the Globe, Shapiro weaves a tantalizing narrative.” --David Lister, The Independent

“The book is really a wonderfully deft interweaving of historical and cultural context, physical and social description, the politics and economics of Shakespeare’s work as a professional actor and co-owner of the Globe theatre.” -- Fintan O’Toole, The Irish Times

“If you have any interest in Shakespeare at all, you won't be able to put it down…for my money, A Year in the Life really shows how books like this ought to be written.” -- Hans Werner, The Toronto Star

Listed among the best books of the year in The Guardian, The Economist, The Financial Times, The Irish Times, The Evening Standard, The Sunday Times, The New Statesman, The Observer, The Telegraph, and The National Post (Canada), The New Zealand Listener, Radio New Zealand, The Courier Mail (Australia), Barnes and Noble.com, and the Times Literary Supplement. 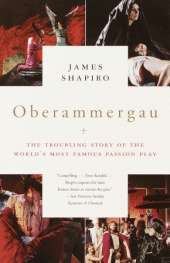 "It seems only natural while reading 'Oberammergau' to wonder if you're reading Shirley Jackson's 'The Lottery' by mistake....Fascinating."--The Austin Chronicle

"Full of fascinating nuggets....If you want to know Oberammergau's play survived while countless others just like it disappeared, Mr. Shapiro can tell you."--Wall Street Journal

"Deftly mends the ancient disciplines of theater and theology with contemporary ethnic politics."--Newsday

WINNER OF THE ROLAND BAINTON BOOK PRIZE FOR LITERATURE

In a provocative study of the influence of Christopher Marlowe, Ben Jonson, and William Shakespeare on each other’s plays, poems and legacies, James Shapiro considers the parodic recollections that reveal these rivalries, illuminating the complex ways in which their mutual influence made its presence and pressure felt.


“The approach is eclectic, the prose carefully crafted. It is, in sort, a rare commodity in contemporary criticism—and important analytical study that is accessible not only to scholars but to theater professionals and lay people as well”—Shakespeare Quarterly

Coriolanus and the Trump Administration's Response to Coronavirus

The Mirror That Shakespeare Holds Up to America

West Side Story: 'OK by me in America?'

Shakespeare Wrote Insightfully About Women. That Doesn't Mean He Was One.

The Question of Hamlet

WNYC, On the Media

Brooke Gladstone, "Our Shakespeare, Ourselves"